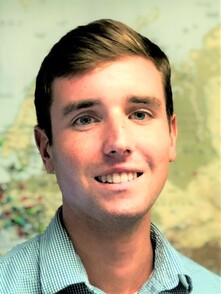 Scott joined TradeMoves in August 2018 as an International Trade Analyst. In this role, he supports tariff management projects, follows trade policy developments, and conducts research on the trade and regulatory environment in countries around the world. His portfolio includes Europe, the Middle East and Africa.

Scott first began researching and writing about trade as an intern at the Atlantic Council’s Future Europe Initiative, where he monitored progress and prepared briefings on EU trade policy. He also reported on global macroeconomic, monetary, and trade policy with the International Relations team at the Central Bank of Slovenia in Ljubljana the summer following his first year of Masters’ work in Italy before returning to Washington, DC for the second year. Prior to joining TradeMoves, Scott worked at the U.S. Chamber of Commerce, researching regulatory policy developments facing US businesses in Europe and keeping members updated on the Brexit negotiations.